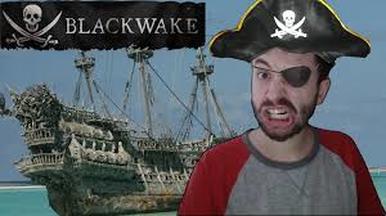 Blackwake a fun-filled adventure on the high seas. The team promises no paid DLC or pay to win items to divide the community, and are in active communication with Blackwake fans on Reddit , Steam and in their own Discord.  This is an early access title, but it is showing great potential and the developers are very in tune with the players.
Blackwake is designed to simulate a team-based pirate experience, complete with sailing into intense naval battles, adverse weather conditions, and muskets.

The team behind this is creating a pirate game that makes players feel like they are part of a crew, rather than controlling ships in a RTS style game or using bots as teammates. Blackwake plays out like any other shooter style game, typically focusing your effort on objective-based game play. Winning in this game requires a good degree of teamwork and as different ships require different amount of hands on deck to operate, the nice thing the developers did was allowing everyone to contribute to any role and not just stuck in one class.

The real challenge is getting random people to cooperate. so that’s why Blackwake developers decided to abolish classes.  Since nobody has a delegated role, everyone else can perform the same tasks, aiding each other as needed. Points are counted both individually and for the team as a whole. Captains are the only distinguished positions, and they hold more power in order to lead the crew. Should the captain happen to be a scallywag, he or she can be overthrown by the ship’s crew.

Ships can slam into each other, doing massive damage resulting in brutal ship to ship combat as crews try to pillage the enemy, as both boats slowly sink into the ocean . Captains will have to account for bad weather on specific rounds and make sure communication is flowing between the different decks  to avoid their vessel being sent to Davy Jones’ Locker.

Gameplay is overall fun and requires a great deal of communication (via commands and voice chat) and lots and lots of teamwork to succeed.
Captains are voted into power at the start, but if the crew is unsatisfied with their performance, they can always vote to mutiny to put someone better in.
Music and sound effects are good, and well suited to the pirate and naval theme; ambiance is excellent even storms which was surprising.
Weapons feel authentic in that they are very deadly, take a long time to reload, and not all that accurate at times (most of it.)

The water and ships look visually appealing to a point, overall customizations for people and ships are off to a good start but of course are lacking at the current stage.
Performance is solid for the most part, steady 60 frames in less in close combat.
All crew members can contribute to the effort in a flexible manner since there are no designated classes aside from the captain.
​Conclusion:
Blackwake reminds me of a naval version of Guns of Icarus Online, but with less content, less complexity, and less polish, which is expected given that it’s early access. I really enjoyed Guns of Icarus, but that was only with friends. While I have enjoyed the gameplay in Blackwake, after a few hours, I’m finding it feeling a bit repetitive and without friends that have it and listening to a captain on mic say argh for the hundred thousand time, I can’t see myself putting more than 10ish hours into it with the current content.The game certainly has a lot of potential, and I’m looking forward to seeing what they do with it.

Recent 2.2 Update - Party Tag System. Die with your friends easier! LOL You can stay together with your crew as you go from game to game and or ship to ship.