Rise and Recruit, soldiers of TAW
The Battlefield 1 Division is starting its third recruiting drive, and again, it is one of the largest and most extensive up to date. With their previous drive netting them a few excellent members, they hope to induct even more recruits into their ranks, and want to give everyone the opportunity to participate in doing so. How you might ask? Well, the answer to that is simple, BF 1 is giving all TAW members a chance to participate, as there are many ways to be involved and not all are just by simply recruiting an individual into TAW. Each way is unique, and not only helps them to recruit, but exposes BF 1 to an even bigger audience and promotes important avenues of TAW. They understand that not everyone in TAW has access to the game, so Battlefield 1 hopes to acquire your assistance in other ways and forms. Whether it be via Twitch or simply voting for us, every bit helps. With that said, allow us to introduce you to their 3rd recruitment drive.

Rules and Procedures
To make this drive extensive and approachable by any member, BF 1 devised a set of ways you can earn points in our Drive. Each action awards you a different amount of points, and they all help TAW in some way or another.  Here are a list of actions that can be done to earn points:


As you can see, everyone can participate in their own way and fashion. Not only that, but you can perform all of these actions for maximum points! For instance, you can attend our Friday Night event, which grants you 1 point. Recruiting a member during it and having them pass boot camp awards you 5 points, for a total of 6. If that member becomes PFC, that’s 2 more points, for a total of 8, all by simply attending one night and recruiting just 1 person!

Prizes
Now you might be wondering, what are the prizes for this drive? Well, like the previous one, Battlefield 1 wants to reward as many members as they can for their help and support. To that end, the prize distribution is for the first 10 people. Ranks 1 to 3 earn EA/Steam gift cards or similar, while the remainder have the option to choose a game from our pool. However, for every 10 recruits BF1 receives, the prize tier goes up, and a new rank is added. You can see this illustrated below.


As you can see the prize pool goes up for the total amount of recruits everyone helps bring into the Division, so everyone is working not only to benefit the Division, but their fellow community members involved in the recruitment drive. As for the game pool offered, BF 1 collected a bunch of games to give away to the members who are not in the top 3. A member can pick any game from the list provided below. The list of games on disposal (with requests allowed with consideration) are:


Start and End Dates
The Recruitment Drive officially begins at BF 1’s mandatory event tomorrow, August 10th, and ends October 1st. They will be having their first Pub Night, tomorrow night at 9:00 PM EST, so it is a great place to come and have you start collecting those points! Battlefield 1 will be having a similar night every other Thursday.

All members recruited into the Battlefield Division in that time period are counted towards a participant’s points, as well as all actions performed. Please remember, a recruit must identify you as a recruiter in their application, or in their boot-camp, or no points are awarded.
The Battlefield Division wishes everyone good luck, and hopes to see everyone participating in one of the many ways provided. Do not worry, their DIs, along with their HDI, NavyChief, are ready to take in all the recruits you brings, and to give them the warmest welcome TAW can offer. 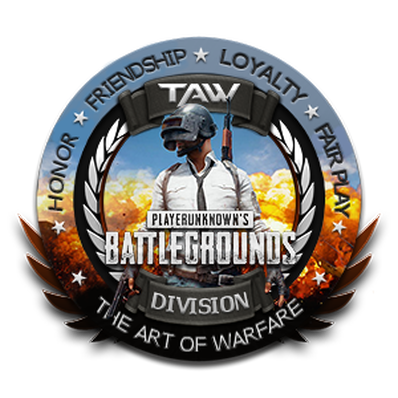 July 30th, 2017. About 124 members from PUBG are ready to jump into a brand new adventure; be launched to Army, 1st Corps. To celebrate TAW’s first new game of 2017, NEWS wanted to give you a little bit of a “behind the scenes” and spoke with SorrowSeven, the SUL and now DC of PlayerUnknown’s Battlegrounds!

Q: Can you tell us a little bit about yourself and your time in TAW?

A: I was recruited into TAW from Guns of Icarus back in 2013. From there I transferred over to the original Titanfall spin up. Unfortunately it closed down and from there I took a discharge. I came back to join Arma and it was really here where I started to pay attention to the TAW way of doing things. I met a really dedicated team and they showed me the ropes, after a while I moved over to R6 Siege where I took my first AL position as SO. I also joined a squad where I met a group of guys that I feel I will be friends with for the rest of my life (Revenant forever!!!) I then took a short trip into the Escape from Tarkov unit where I spent a few days as XO (Sorry Natalino and Shiro) before taking the opportunity to move into VG to help spin up PUBG.

Q: Focusing on your time in VG; Player Unknowns Battleground is the first game to launch out of Vanguard in 2017 with 124 members. Quite the amount of people, but for those who don’t know much about the game; Please explain briefly what PUBG is about and elaborate on what the division in TAW exactly does (organization of events, etc..) ?

A: PUBG is best described as a copy of battle royal and for those of you who don’t know what this is then please go watch it, it’s like the hunger games but its good. The goal is to be the last person or team standing by any means necessary!
Within TAW itself we have a range of teams from casual to competitive and we are working on how is best to support all play styles. We are looking at hosting our own tournament in the near future, possibly opening this up to the public to generate more interest in TAW. We fortunately have access to a custom server under agreement from the games e-sports team, which is great fun!

Q: How did you and your Unit experience their time in VG?

A: I think for all of us Vanguard was a huge learning experience, the team there has a huge amount of experience and hopefully I picked some of that up. We had some growing pains while spinning up but I think we expected that and it wasn’t much of an issue. Generally because of the support we had there no problem was too big to fix.

Q: And now that PUBG is launched into Army, would you say much (leadership, communication, training, events, etc…) changed or is going to change?

A: No, to be honest I hope we stay the same and keep the same momentum. I obviously hope we continue to grow and as I’ve said previously I really want us to focus on making sure we cater for both the casual and competitive needs of our members.

Q: If there is something new that you learned, what would that be and how did that happen?

A: Lots of things! Always follow CoC and instill this in others is a big one I think, delegation too but mostly I think it’s best to build a close team that work together. Communication is so important.

Q: What advice would you like to give any future Spin-Up Leaders?

Q: Lastly, when looking back to it all; what memory will stay with you the most?

A: Aside from Skipper earning his Gump, by putting a car into the bottom of a river after claiming he was “getting pretty good at driving”. I would say I will never forget the pride I had the moment I gave out the medals we had for launch, I only wish I could have given out a few more to those who earned it.
To wrap up this Q&A, here’s a quick public service announcement coming from the front of PlayerUnknown’s Battlegrounds :

“Hello from the battlegrounds team!

We are very excited to bring you the first, last man standing tournament;
This will be a free for all match with PUBG standard rules hosted on our custom server. All members of TAW are free to enter.
It will take place on Sunday 27th August @ 14:00 UTC (PDT 0700, EDT 1000, 0000 AEST, 0200 NZST) This link will help with time zone queries

To enter you are required to fill out this form

Thanks all and good luck!”
LTC - SorrowSeven

Battlestate Games studio developing Escape from Tarkov just launched/moved to the closed beta testing after nearly a year of alpha testing. This is a great news for many EFT fans as well as those who were not able to spend up to $150 to participate in the closed alpha testing. But now in few days to a week, all players who have preordered the game can join and play. We expect a massive influx of players joining our family here in TAW with this and also we would like to invite all current TAW players who own a pre-order package of the game to join us for some raids. EFT is a harsh game to play alone and sometimes even impossible. Plus it is a whole new experience when playing with others.

If any new beta players need any assistance, feel free to ask any of our guys in the TeamSpeak channels, we will be more than happy to help you and also go through our many documents available in the combat training office Teamspeak channel. Congrats everyone and I know a lot are happy about this so have a great time!

Our NA Battalion XO, CajunX, who is an active Youtube streamer, dedicating his channel to EFT and TAW content released a beautiful trailer showing the experience and fun revolving around our EFT community in TAW. We would like to thank him for his works, Wisebird for his graphics work, SixOldMidgets for his voice acting and everyone else who partake to make this video a great one to watch and show the friendship found within the team. You can checkout the trailer as well as the animated logo videos under the links below:
TAW Trailer Video
TAW Animated Logo Video