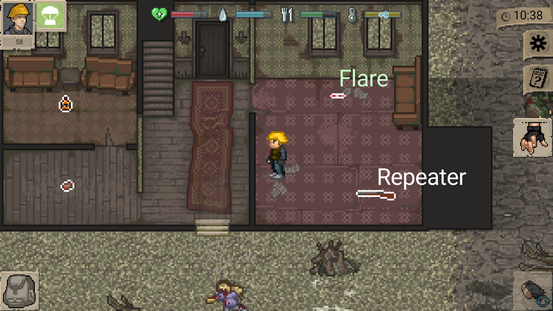 ​The mobile gaming world is by and large one of twitch games and short missions, primarily designed for quick, 5-10 minute bursts of play at the most. They are geared towards a spur of the moment, quick match while waiting on your food world completely opposite of traditional gaming where immersion is key and the hallmark of a great game is when the player sits down to play at 9pm, plays for a while and asks “I wonder if any restaurants are still open?” only to discover that yes they are...for breakfast. Mini DayZ by Bohemia Interactive, a derivative of the popular PC game DayZ breaks that paradigm and takes a mobile platform to the place where gaming was meant to be: complete immersion.

It is rare enough in recent times to find a PC or console based game that has the players finding themselves getting sucked into multi-hour play sessions that seem to last minutes. DayZ, by all accounts, is just such a game with it’s unforgiving, multi-faceted survival game play. Mini DayZ trades the PC realism for 16-bit style pixel graphics and scales back the UI, but it manages to maintain the all-important immersion factor that lends itself to lengthy, engrossing turns at the controller. The game is built with two touch screen based movement controls, a touch and go style similar to the Diablo scheme and an on screen joystick. Both are butter-smooth and integrated well enough to disappear from the top of mind quickly. The free play model allows for supply drops with short twenty second videos that can actually serve to give a quick break while providing much needed survival gear. The game itself is as simple as can be. The player starts of the beach near by various settlements on a randomly generated map and all they need to do is forage, hunt, scavenge, and fight to survive. The open ended gameplay serves to keep the tension going and the random play makes sure it is always a question of how long the player can survive. Player found guns and ammo early on? Guess the zombies aren’t a problem, too bad all they have is t-shirt and eventually freeze to death. Player shacked up in an old house with plenty of food growing out back? Sucks that they couldn’t find water nearby and ended up running halfway across the world fleeing enemies. The only real complaint about the game is the absolutely murderous difficulty curve. Even on novice difficulty, encountering more than one zombie in a single fight isn’t going to end well more than once. If the difficulty gets taken up to easy that same two zombie battle is almost a certain death sentence unless some relatively decent gear has been acquired. Any higher than that and the multi-enemy encounter is a death sentence unless the player is extremely well armed and doesn’t miss.

Overall, Mini DayZ is one of the best mobile games that a gamer could hope to find. It is mainly offline, so outside of the initial download; data usage is next to nothing. It isn’t resource intensive so battery life doesn’t suffer nearly as much as with other mobile role-playing games. It is extremely well programed, which means that a player will almost never have to worry about a glitch, crash, or dropped connection killing their best run half-way through. It can be played for five minutes or five hours and not suffer in the least for the time available and short of a difficulty curve that can only be described as a hockey stick graph, gamers of any breed can’t go wrong giving Mini DayZ a place on their device.