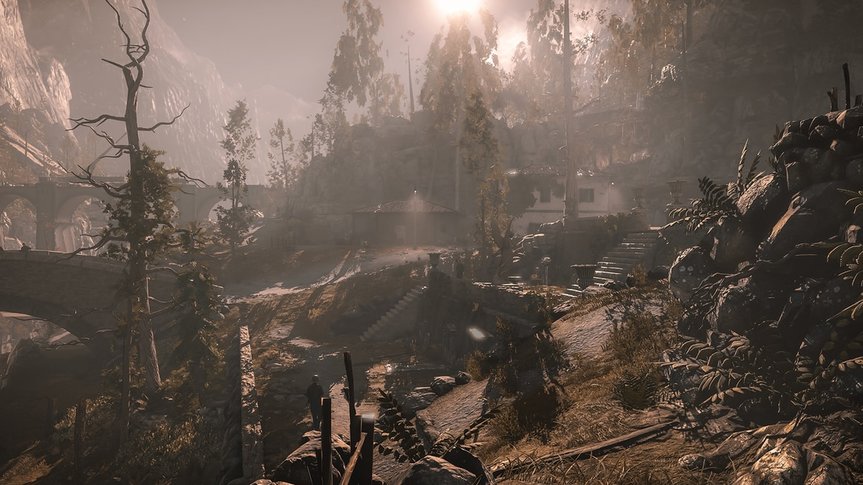 The long awaited sequel to Sniper Elite III was released by Rebellion on February 14, and for fans of the series was well worth the wait. For those not familiar with the series, it was way back in 2005 when Sniper Elite was released followed by Sniper Elite V2 in 2012, and then Sniper Elite III, a prequel, in 2014. Sniper Elite 4 expands on all its predecessors’ accomplishments and adds to it in a way that makes this version exceptional.
​
Background Courtesy of Sniper Elite 4
The Sniper Elite series is a third-person shooter set in a World War II landscape and matches some real events. The game uses true-to-life equipment, small arms, artillery, landscapes, and much more to put the player in that era. Of course, the primary weapon is the sniper rifle. Many of the earlier versions offered downloadable content to supplement the player’s rifle collection. This holds true for Sniper Elite 4 as well; this version gives a wide assortment of good rifles which can be adapted to suit any play style. In keeping with previous titles, everything in a player’s loadout and the way they are accessed remains the same. The items include grenades, TNT, medical kits, rocks (used to distract enemies) anti-personnel rounds, land mines, and many more new items. The ability to select a route and carry out missions based on difficulty has also returned and this writer has found that developers have expanded on this feature, making the game even more player intuitive. A second important tool in the arsenal is binoculars; they make it possible for players to tag a wide variety of objects and personnel in the environment. Viewing through binoculars, each item the player tags  gives a detailed description on the heads-up display. Proper use of this tool is essential to the overall game dynamics and strategy. Another major change is the ability for the player to drop onto ledges, pipes, chains or railings and transverse left or right ,up or down and drop  onto other structures. This same ability can be used to advance up to a target as well, and then interact with that target. This is huge when stealth is your best ally and the player is surrounded by the enemy. Overall the added and improved tools of the sniper trade blend in nicely and add to the game's flavor.

For those who like large maps and great graphics, this game measures up on all accounts. Many players will be thankful for the map key where they can tag an area to go to, as well as see where they are at. Some of the maps are so large that getting lost is a real possibility. Like many games, exploring the environment of Sniper Elite 4 reveals treasures everywhere, Sniper Elite 4 and a running and gunning play style will miss nearly all of them. This game almost commands the player to move slowly, explore buildings, look for important documents, and form tactics to complete the mission. The AI in this game has evolved as well and alters the game on the fly. This is immediately realized when a player is surrounded by the enemy and has to fight to freedom. The graphics in this game are very good and is something this writer has come to expect from this genre.  Good graphics increases the overall gaming experience; in that regard this game meets and exceeds most expectations. That said, it would be wise to look into the minimum hardware requirements before buying Sniper Elite 4.

Since the release February 2017, Sniper Elite 4 has proven addictive and entertaining at every level of play. In having played the complete series of Sniper Elite, this one shines the brightest. Fully expect that more content will be released as time goes by based on the game's open-ended platform. Even those new to the series, from those who like to play games that need some tactics to those who want to run and gun, this game fills the bill. Speaking of bills, like any new release, this one will cost a few. At $71.99 for the Deluxe Edition, it will be better for more cost conscious gamers unfamiliar with the series to look at Sniper Elite III. It is reasonably priced and a perfect primer for Sniper Elite 4 when it drops in price. For those who have played, they know that the steep price tag is well justified and that this review hasn’t even scratched the surface of what can be found in this game. Frankly, no review ever will. Sniper Elite games must be played and experienced first hand to have any idea just how much they have to offer someone who is willing to slow down the pace and enjoy the chaos of being hunted down by a team of crack troops.
​
-Happy hunting-